Jeff drags a rake across the newly cut trail, separating vegetation from dirt and rock. He wears gloves to protect his hands and a hat to protect his face. Despite a cool breeze, the sun is strong and Jeff, along with 150 other volunteers, is exposed to the elements.

It’s National Public Lands Day 2017. We’re at Copper City Trails, just north of Three Forks, Montana, about 30 minutes west of Bozeman. Trail construction has wrapped on three miles of new trail, and volunteers are here putting on the finishing touches. While a machine did much of the heavy lifting, hand tools and humans are needed to smooth things out before this beginner loop—Green Eagle—opens to the public.

After a morning of work, lunch is served, speeches are made, and ribbons are cut. Dozens of riders, from grade-schoolers to grandfathers, pedal away. A new trail system comes to life. 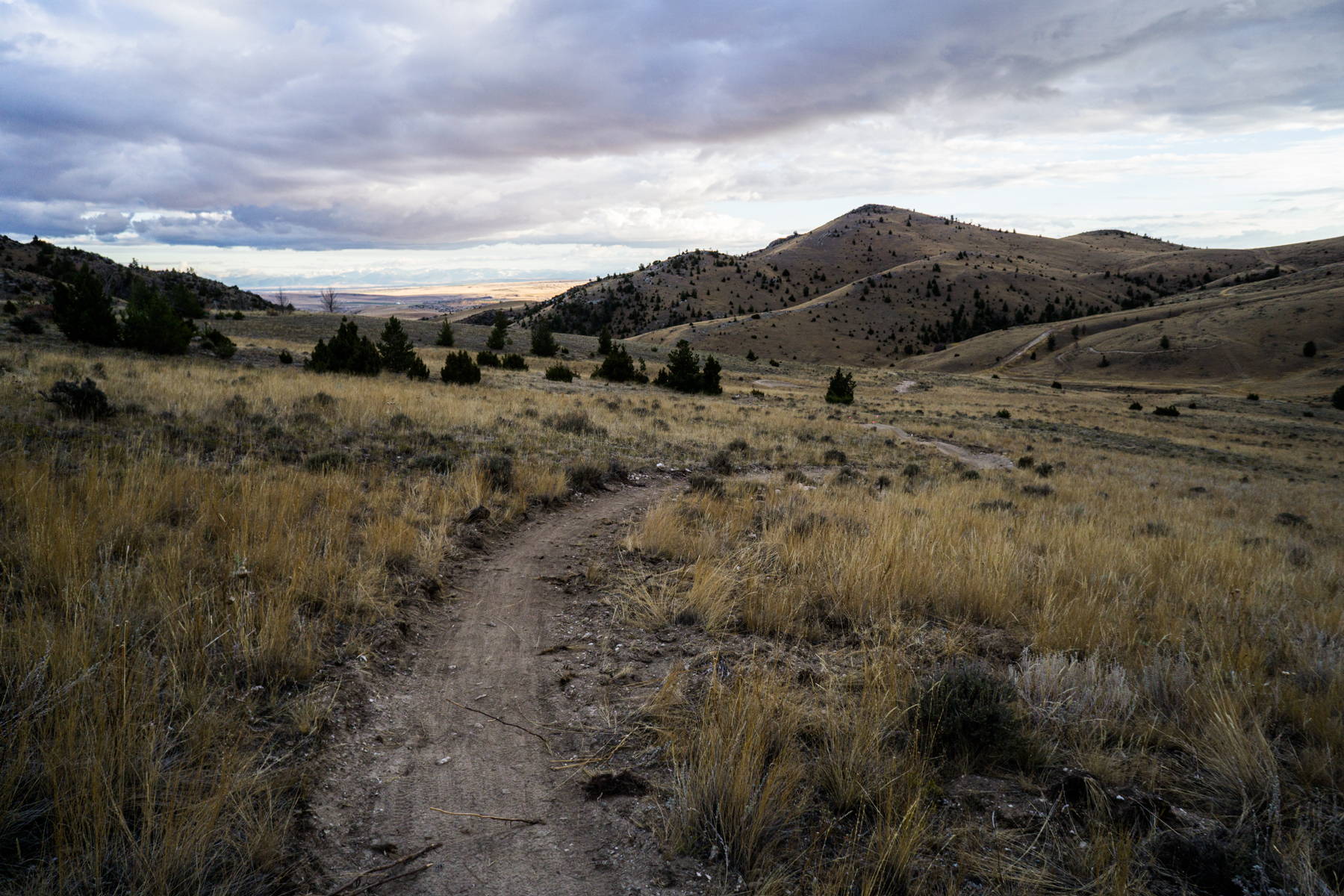 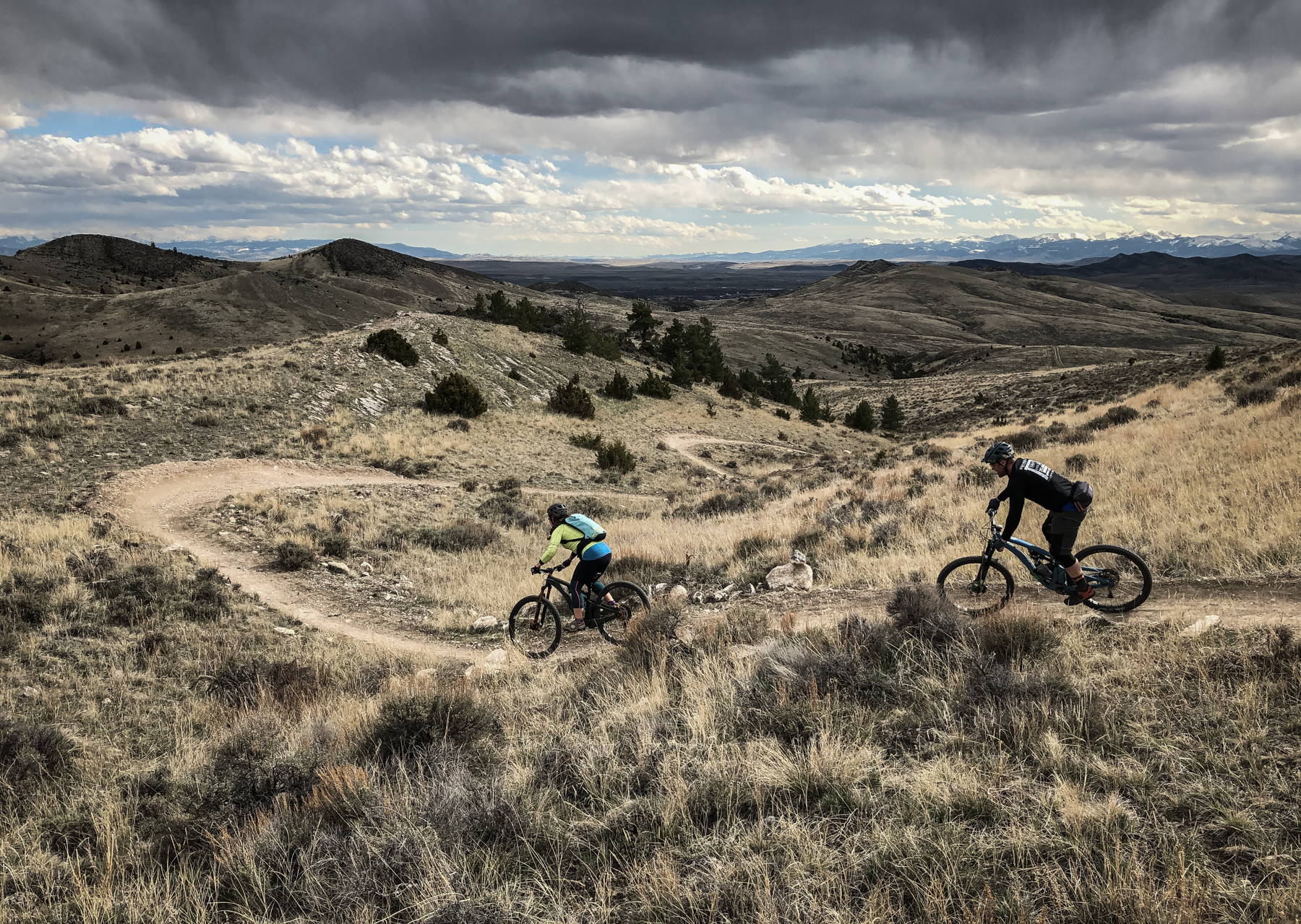 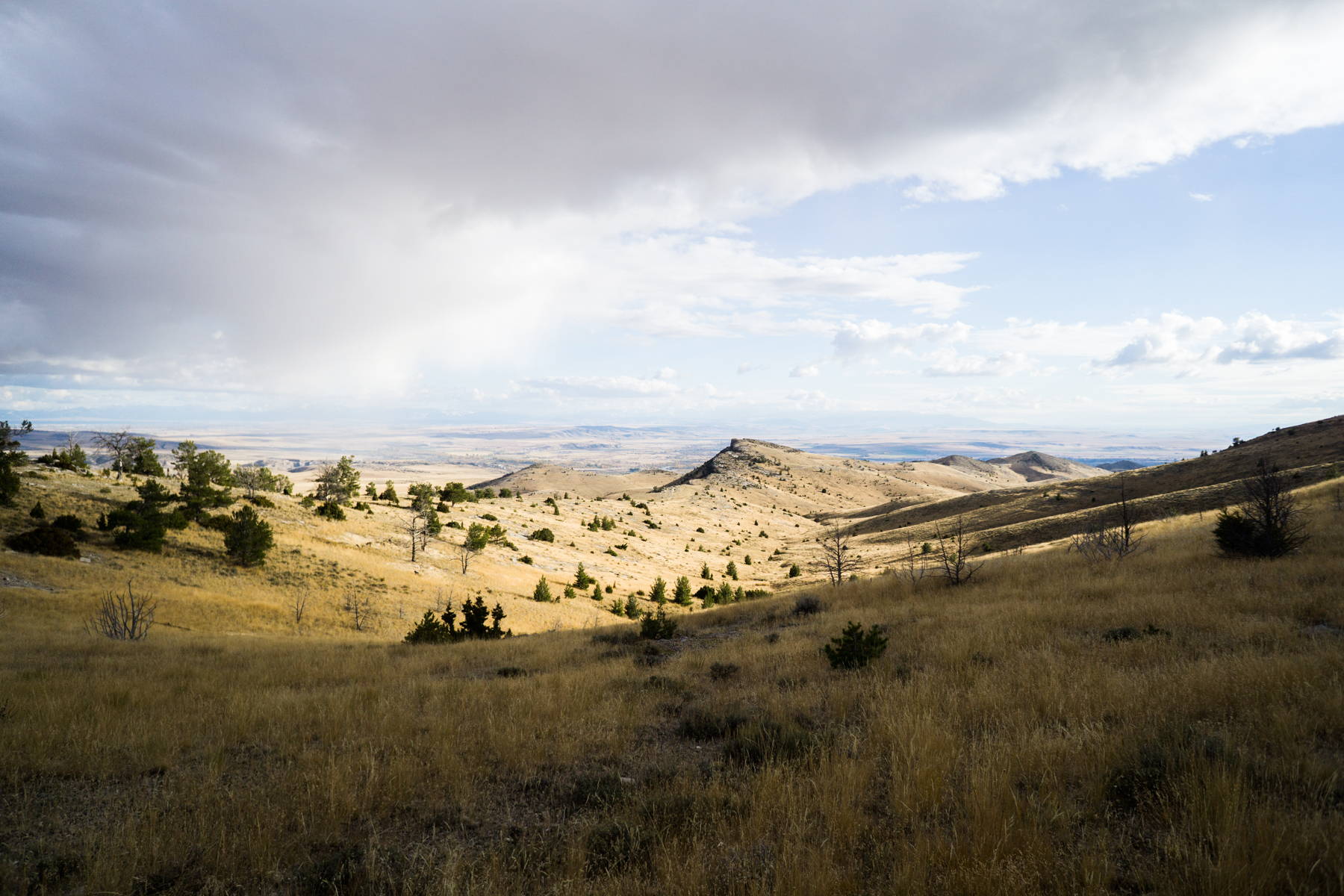 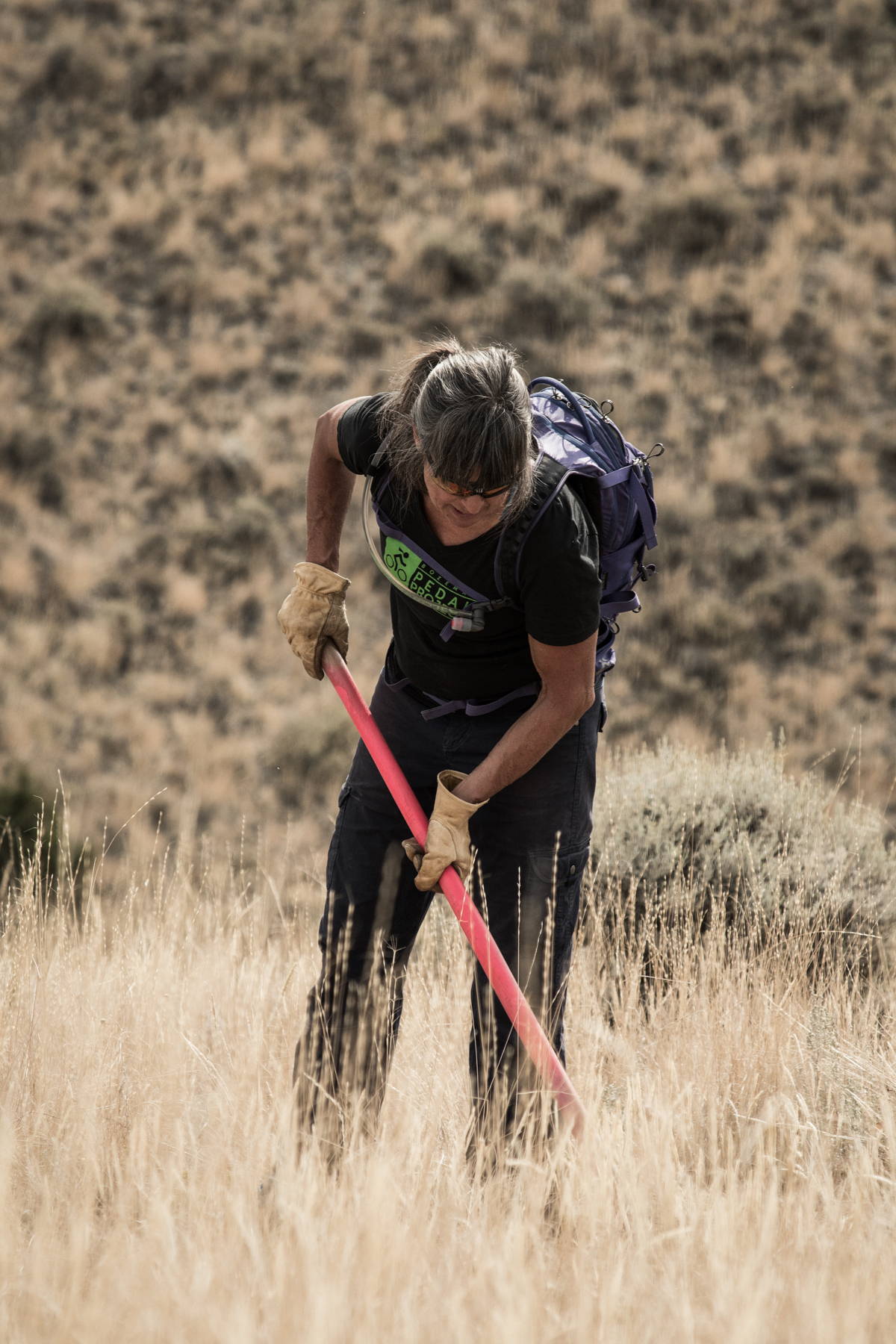 "Limestone tech; resort-quality flow; vertigo-inducing ridgelines: all this, on a 2,500-acre piece of BLM land that didn’t have a mile of trail two years ago."

Fast-forward to National Public Lands Day 2019 and over twenty miles of trail have been built at Copper City in three summers. Together with the Bureau of Land Management, the Southwest Montana Mountain Bike Association (SWMMBA) has coordinated an immense effort to give this riding community something they desperately needed—low-elevation trails that dry out early and stay dry late.

The system consists of a series of stacked loops that all originate from the same trailhead, the Green Eagle trail that started it all. From there, trails progress in difficulty and distance, eventually leading riders over two ridgelines to a world that feels wholly apart from where they started.

Each trail is unique, and the terrain itself is a rarity for Montana. Most local mountain bikers are accustomed to rugged, timbered singletrack; Montana boasts some of the best backcountry and alpine riding in the country. Here at Copper City, bermed corners outnumber tight switchbacks and two downhill-specific trails add to the roster of purpose-built offerings. The semi-arid landscape looks more like Utah than the Northern Rockies, and riders are warned to steer clear of rattlesnakes, not be bear aware. On any given Saturday, the parking lot overflows with cars, so much so that SWMMBA expanded trailhead parking and added a vault toilet and shade structure. 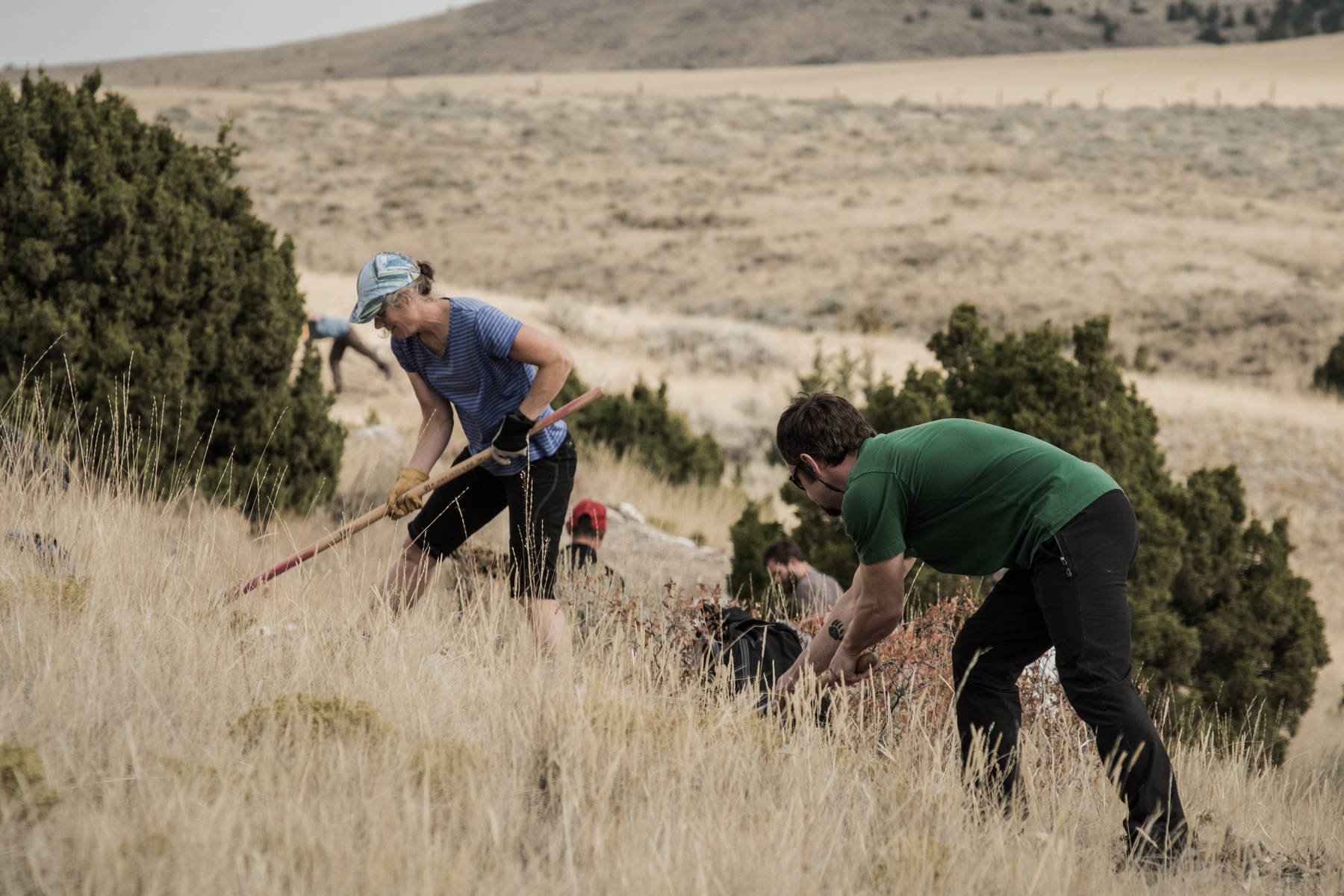 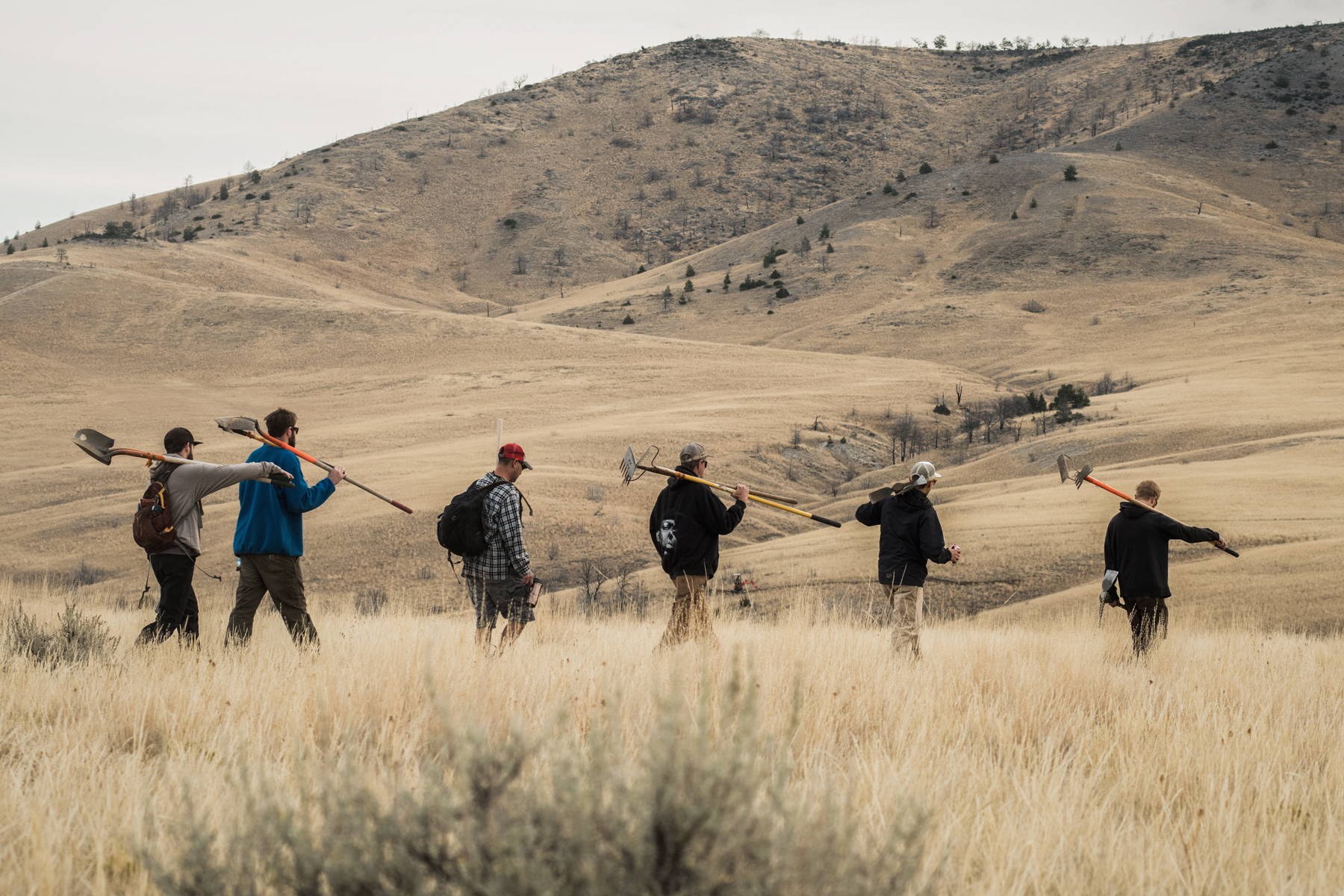 "Each trail is unique, and the terrain itself is a rarity for Montana."

But it’s the trails that keep the riders coming back. Green Eagle’s mellow grade belies what waits beyond. Limestone tech; resort-quality flow; vertigo-inducing ridgelines: all this, on a 2,500-acre piece of BLM land that didn’t have a mile of trail two years ago. During the 2019 season, Montana’s National Interscholastic Cycling Association league held their first event at Copper City. Hundreds of people descended on the trail system, some to ride and some to watch, many to volunteer and even more to cheer on their friends and family. On a spot of arid rangeland formerly covered in shot-up trash and not much else, the bike community grows.

And with it grows the army of volunteers that make the trails possible. While SWMMBA has contracted with professional builders to handle trail construction, nothing gets done without the countless hours of behind-the-scenes sacrifice. Lines in the dirt start as lines on a budget, long before routes are flagged and earth is moved. Parties are thrown in an effort to raise money. In-kind donations are solicited, then granted. Generous business owners add their support, and eager mountain bikers lend a hand when they have an hour or two.

The results are impressive, and nowhere more so than grinding along the Trident trail’s now-infamous shelfie rock. The Limestone grabs your tires, so traction isn’t the issue, but the crumbling seabed gently pokes and prods at your bike, knocking you off balance as you try to power up steep outcroppings, some precariously placed near sheer 40-foot drops. Cleaning the whole trail feels like an accomplishment, but then you reach its southern terminus and a series of hairpin switchbacks drop away to the gulch below. Here, even seasoned riders struggle to stay on their bikes. 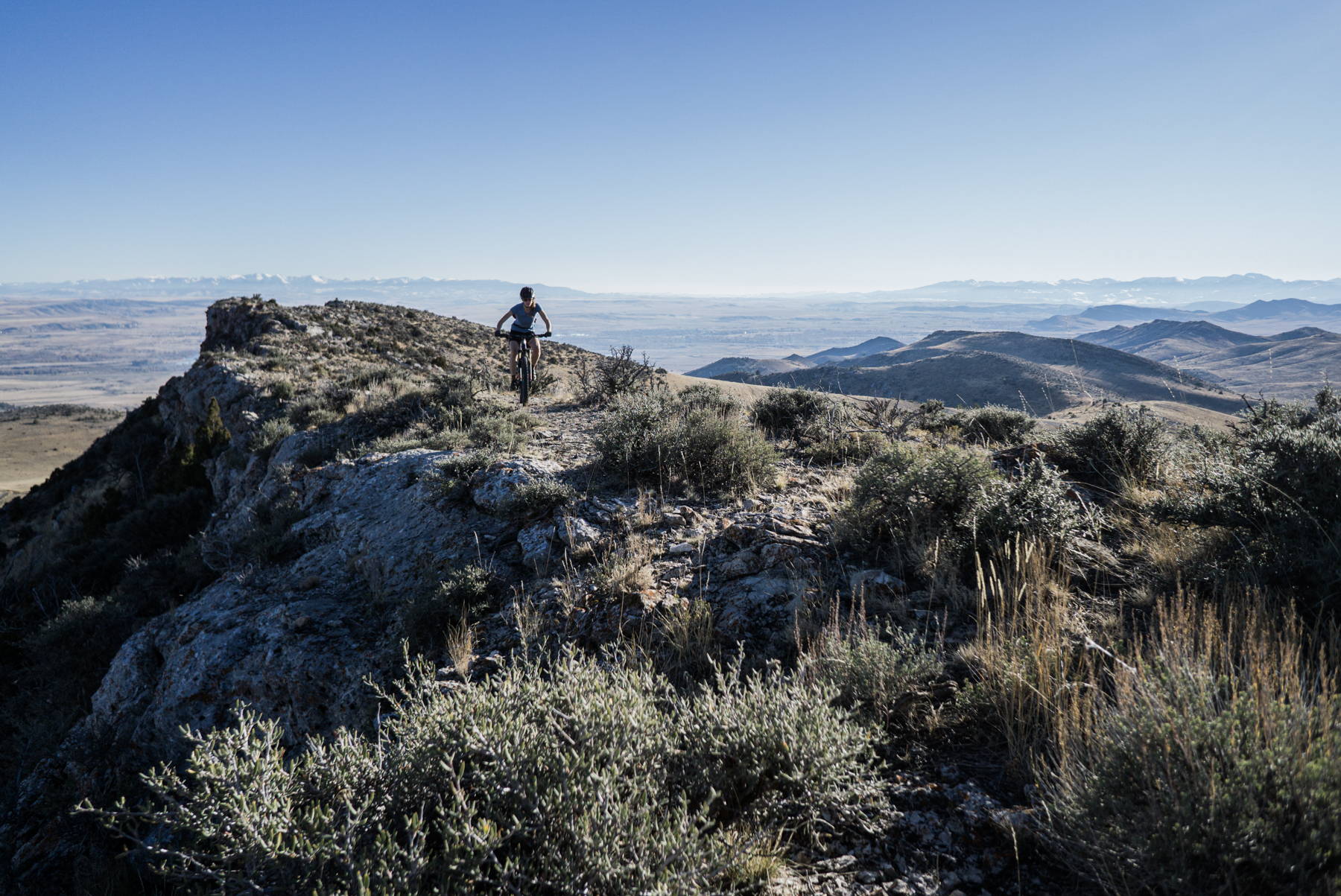 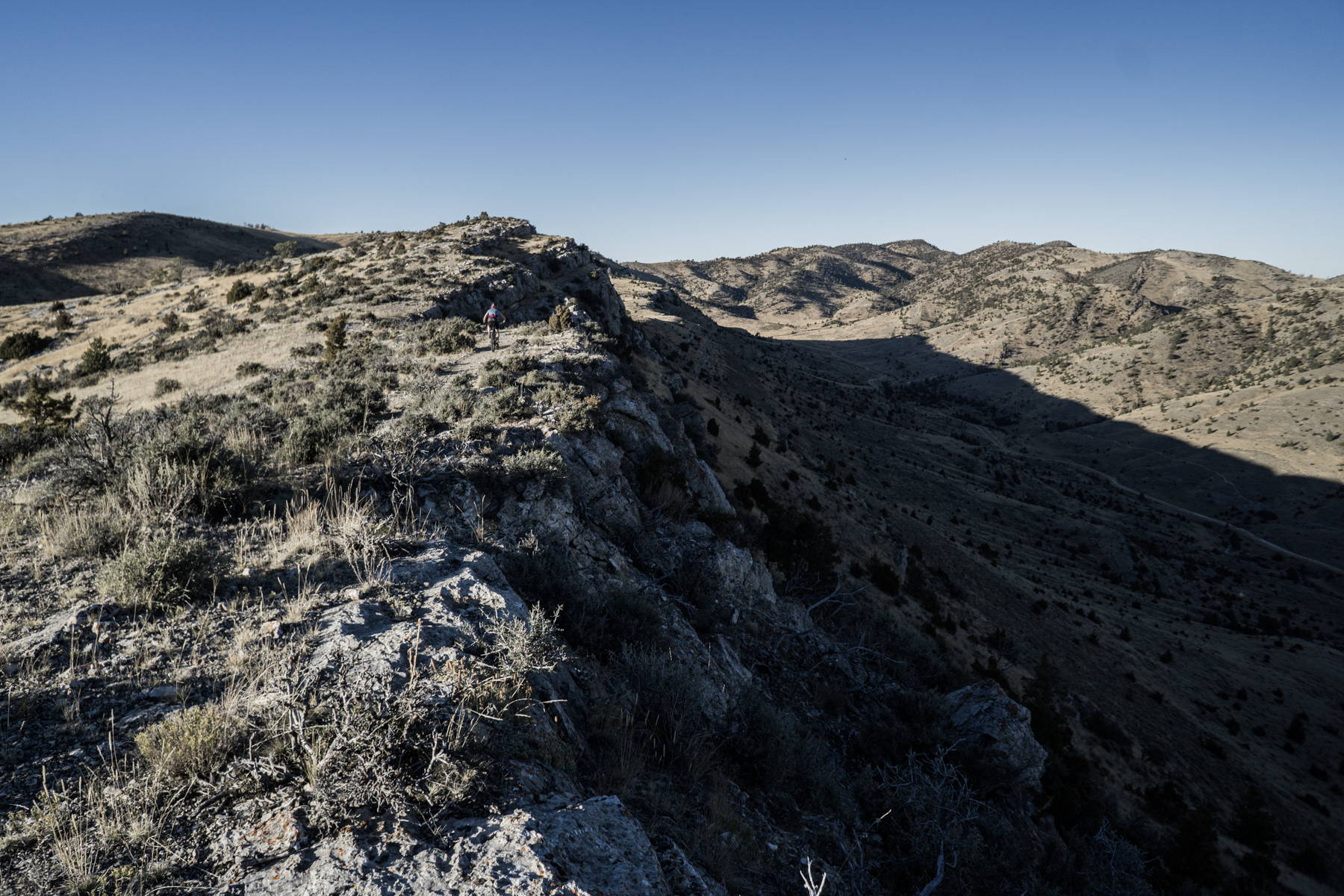 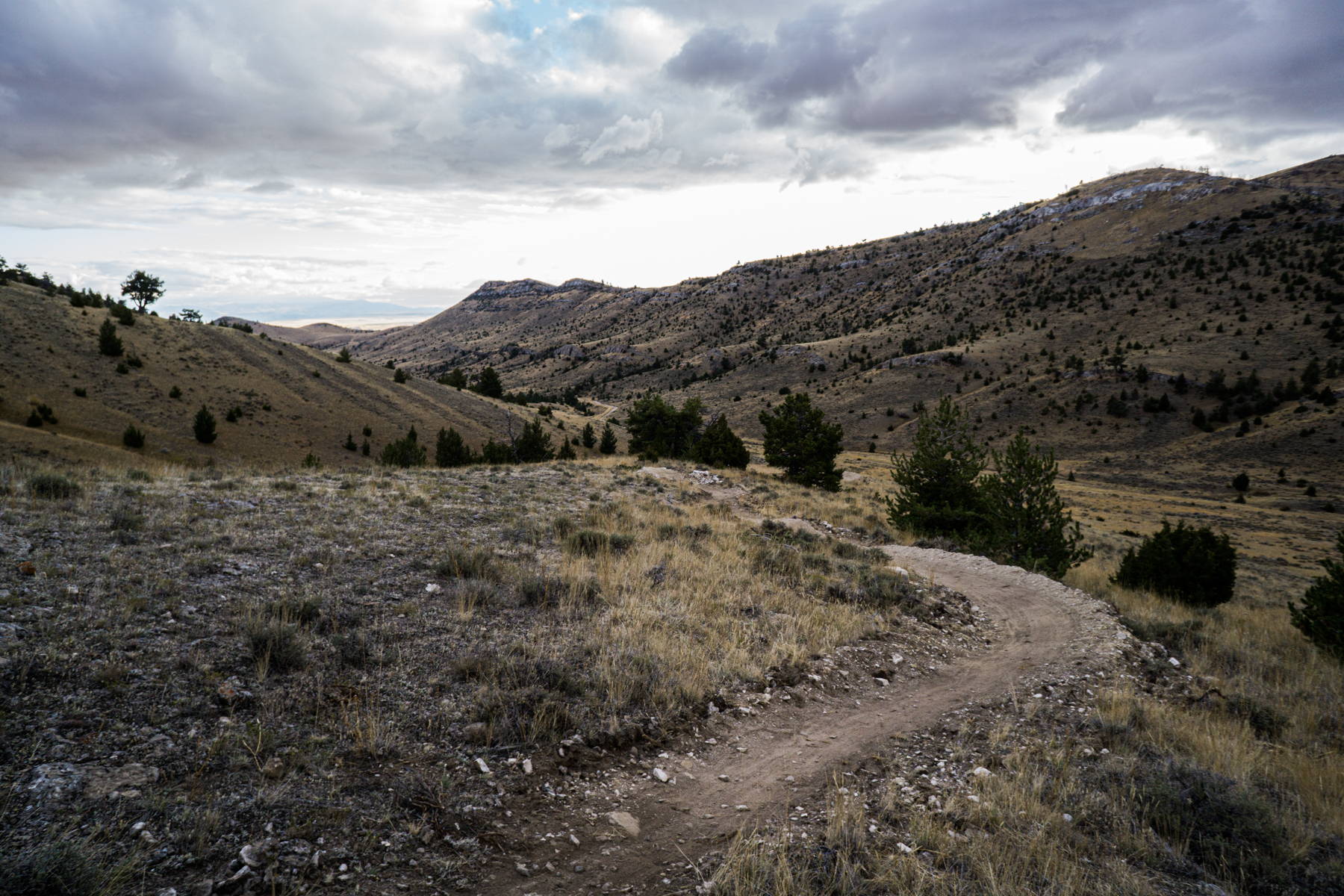 In the far northeast corner sits Copper City’s newest trail, the three-mile Destroying Angel. On National Public Lands Day 2019, this is where most volunteers find themselves, prying loose, persistent rock and smoothing out rough corners. The trail has only been open for two weeks and it’s in need of tires. Snow has already descended on the high country, so odds are good that many regional bikers will seek out this singletrack for a few more months, and the trail will get the traffic it needs before next spring.

Which is the point of Copper City. The project was a direct response to the community’s needs. A few individuals led the way and a small regiment followed behind. In their wake, an army of volunteers fixed the problem. Now, mountain bikers in southwest Montana have somewhere to ride in April when the snowpack is unyielding, and in October after early-season squalls. There’s somewhere for youth races and family outings; a place for full-face-wearing downhillers and cross-country riders pushing miles.

Just a few years ago, Copper City’s trails were a figment of someone’s imagination. Today, the reality far outshines the dream. 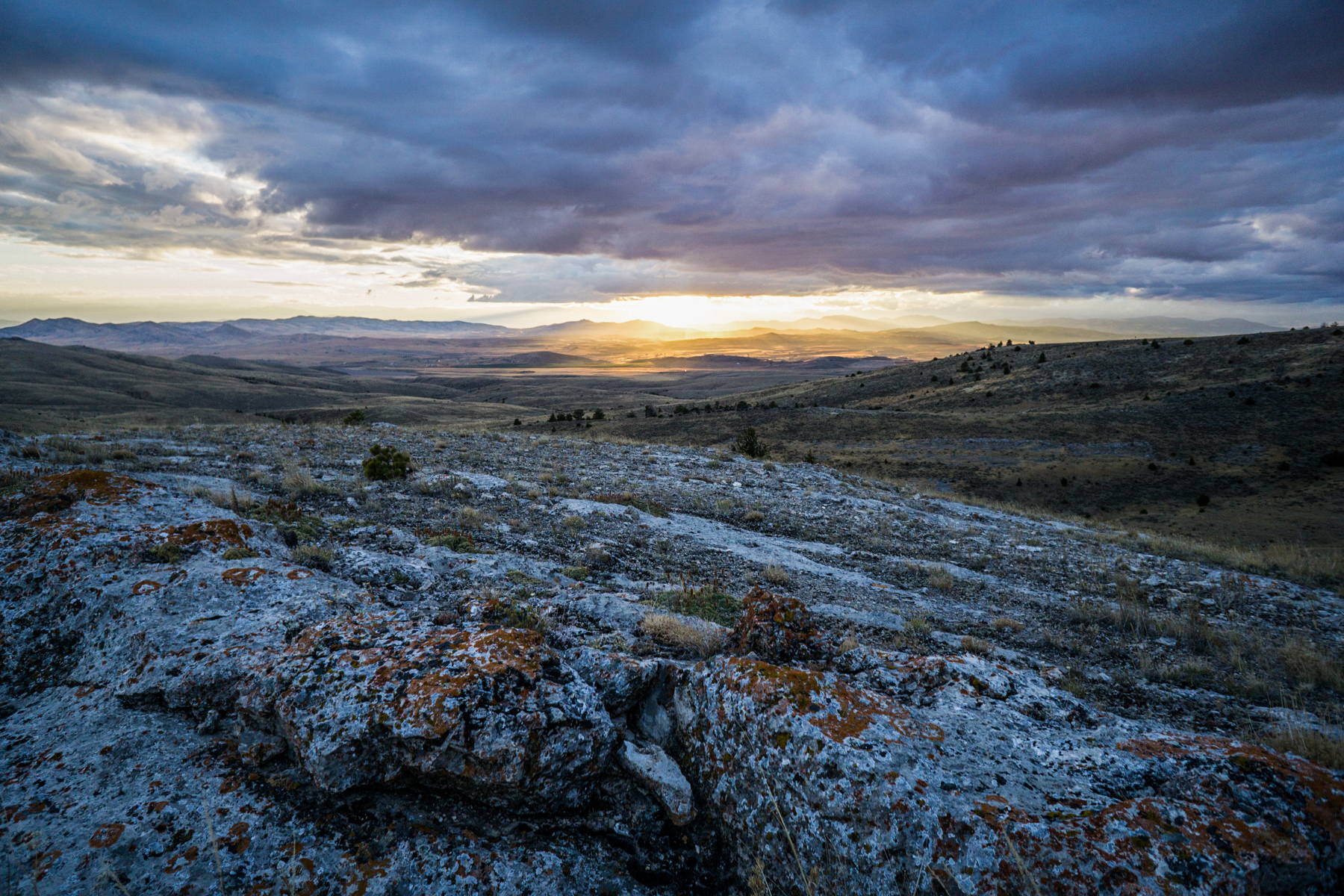 To become a member, or make a donation to Montana trails, please visit www.southwestmontanamba.org