The doorbell of the Alaska bike shop jingled shut as another khaki-shorts cruise-ship goer left, leaving me alone at the counter for a brief moment to contemplate my future. My Job at the bike shop would end in mid-September, and I wanted to be riding the Baja Divide in mid-January. Those things were clear—what lay between them was not.

My partner Sophie and I had decided that riding the Baja Divide was a goal that we didn’t want to shelf until circumstances were more convenient. We wanted to give ourselves plenty of time (for us that was two months) to complete the route, not buying return tickets until we were in La Paz.

We quickly realized that a route this long (1,700 miles) would require us to fit our plans around the ride, rather than fitting the ride around other plans. Fortunately, Sophie had lined up another bike-tour-guiding job from September to mid-December—just the right timing. I still had no idea what I was going to do. 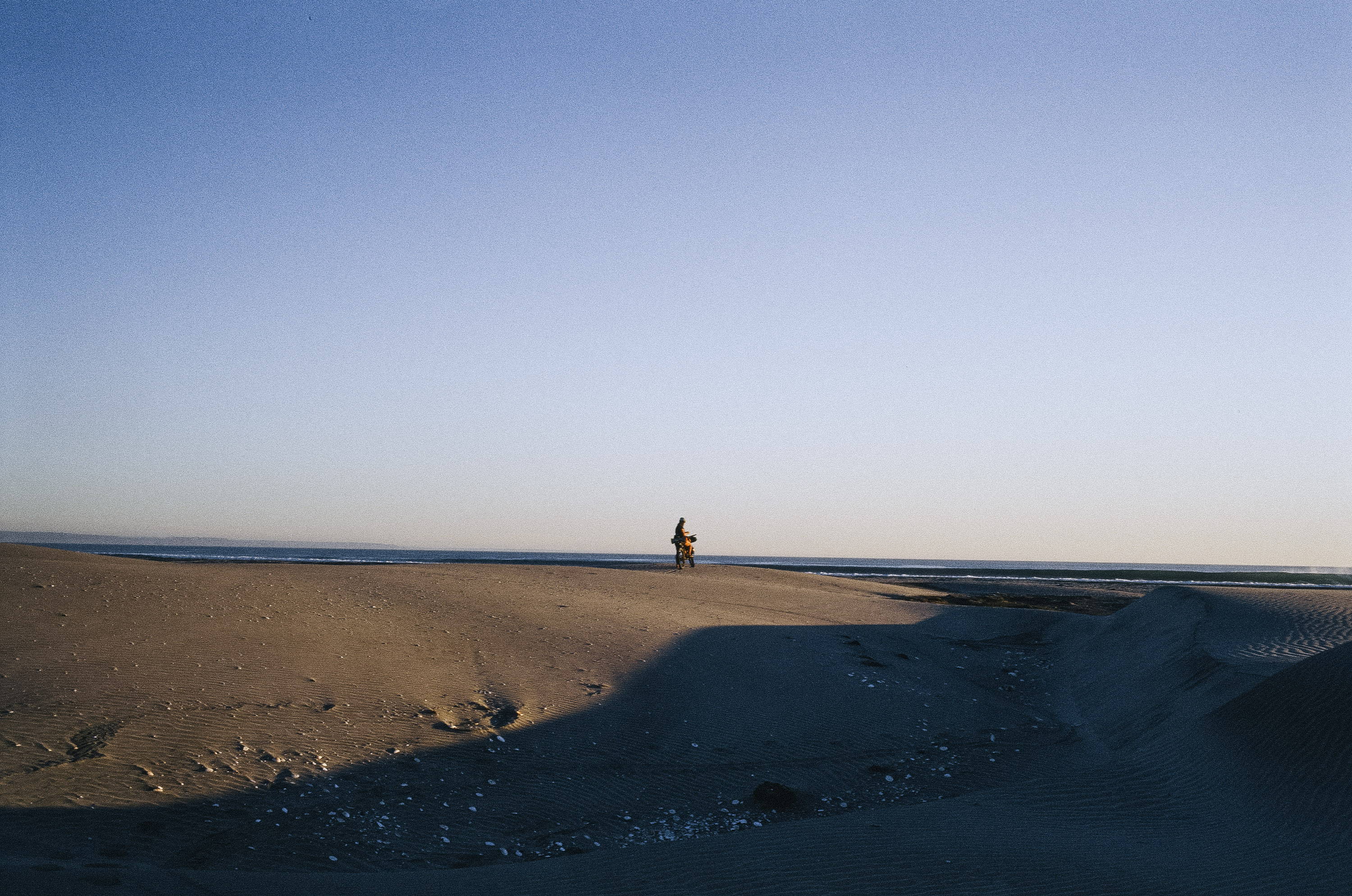 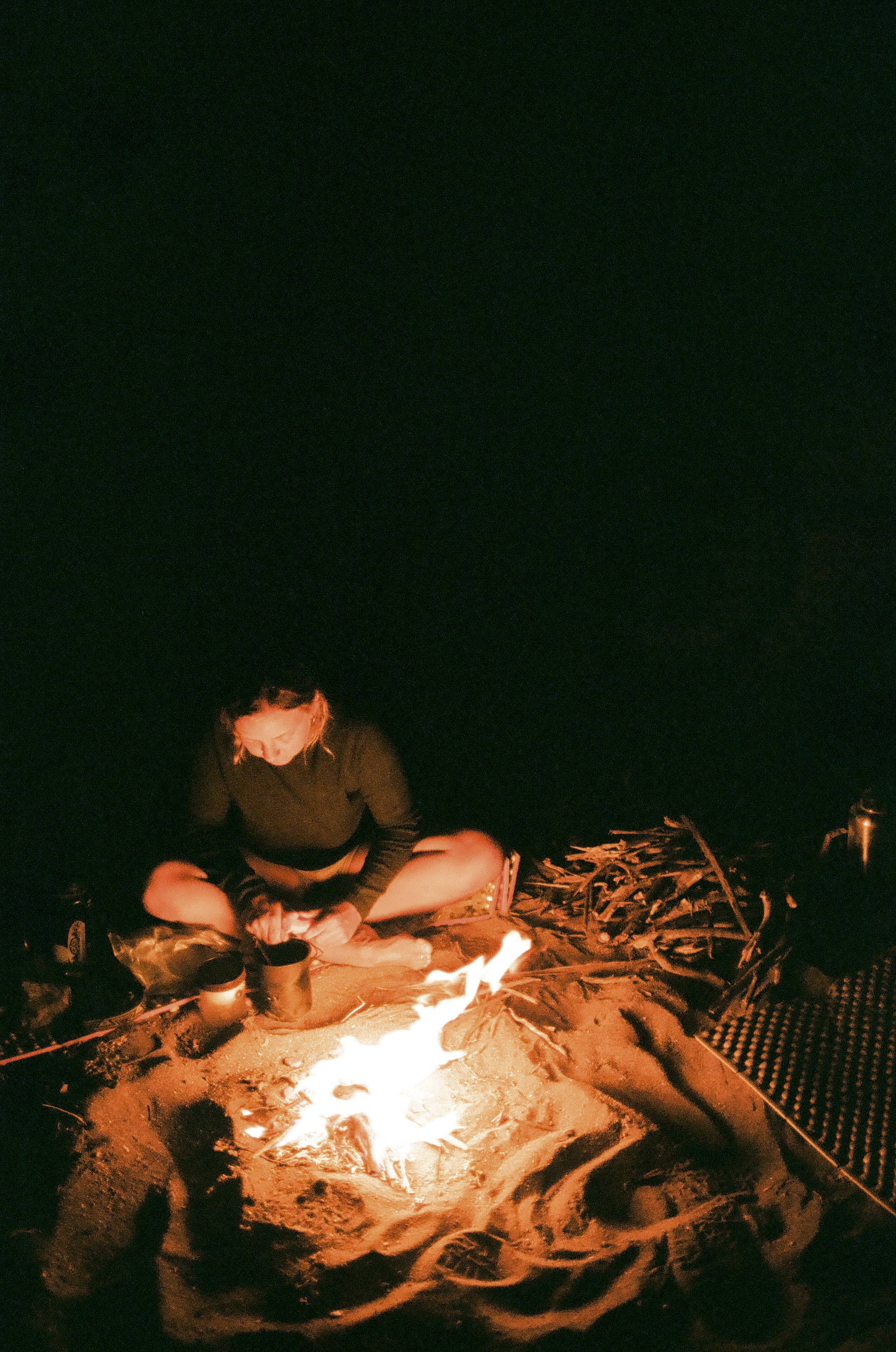 Fall comes earlier in the North. It was only mid-August, yet the wind had picked up, this time with a chilly bite that made me put on a sweater. My job and summer was rapidly coming to an end. What would I do when it all shut down? When the cruise ships stopped coming and the bustling tourist restaurants and shops of Skagway locked up their doors for the long winter?

I kept hearing about a job that a lot of guides worked in the fall: hanging Christmas lights for municipalities and suburban families in Salt Lake City, Utah. It was hard to imagine an entire industry built around professional Christmas-light installers who were mostly vagabond climbing guides, unafraid to crawl around on steep roofs in the Utah winter, avoiding electrocution through a range of tricky methods.

It all became clear soon enough. The heights were scary at first, but working 60-75 hours a week, I soon learned to cope. The Baja Divide was a daydream that sometimes surfaced when I looked out over the Salt Lake Valley from atop a home, trying to see the desert mountain roads reflected in the white flakes that fell silently. Looking back at my hands, I’d remember where I was: lying atop the peak of a roof, on my stomach, reaching over the edge to clip a Christmas light under the eve of a home.

We worked fast. In teams of two, driving a van from job to job, getting paid for how many feet of lights we hung. In an efficient team, it paid well and the time passed quickly. December soon came, when the business slowed down and all the vagabonds (including myself) scattered to spend a moment with their families over the holidays. 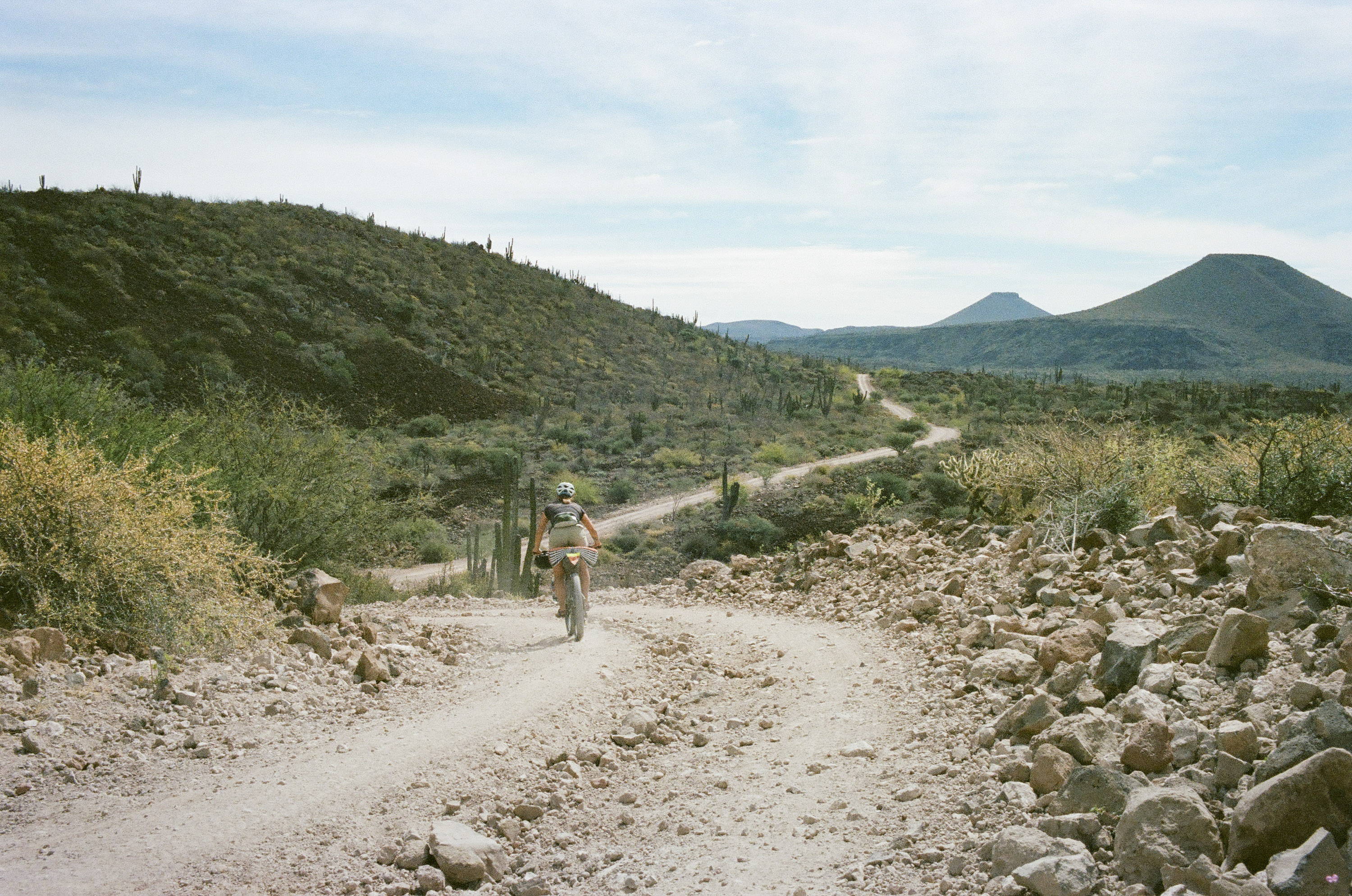 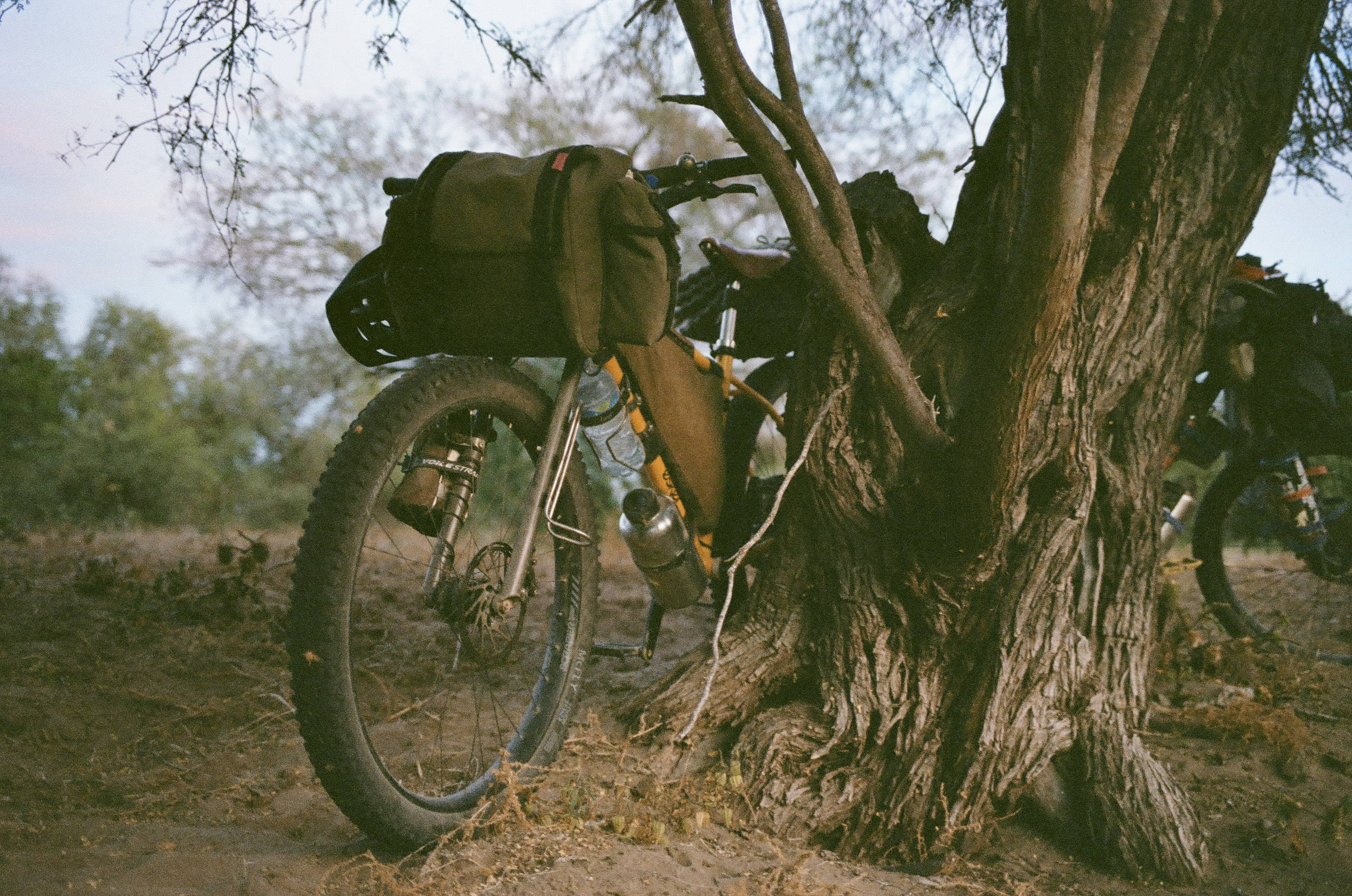 "The past three months felt like a dream when we were finally camped atop Otay Mountain, in the outskirts of San Diego."

I was free, finally, and the choice I made to work a grueling job for a long vacation was bearing its reward. Sophie and I rejoined in Seattle with glee, immediately plotting our departure, carefully calculating what we’d carry on our bikes. We did this once more before we actually rode away from my truck, parked at a friend’s house in San Diego. Finally camped atop Otay Mountain in the outskirts of San Diego, the past three months felt like a dream. I could still feel the cold of Utah, then I’d remember where I was: warming a pot of ramen with egg and veggies, on a grassy patch of BLM land watching the city lights glow while the desert night fell. 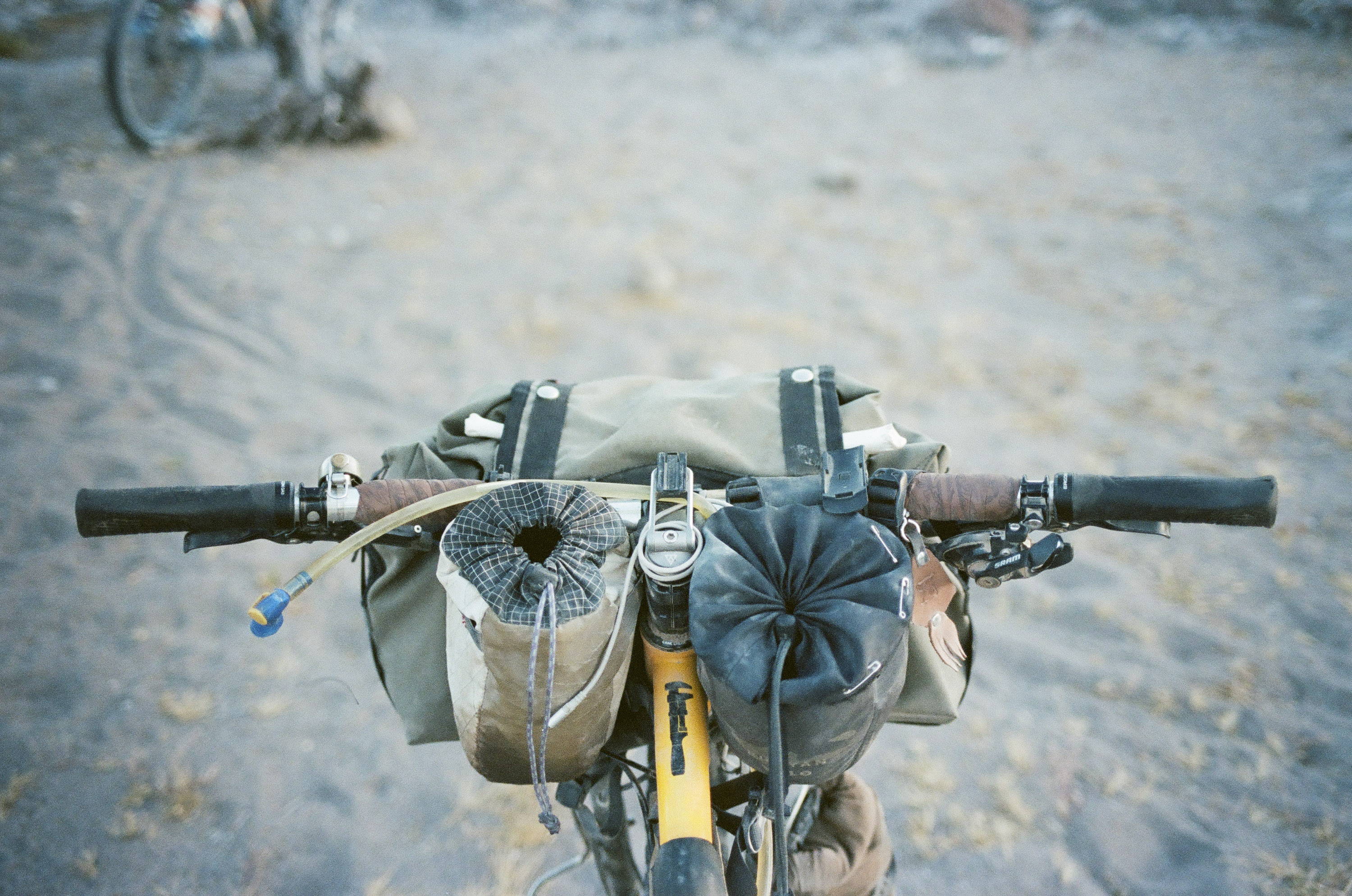 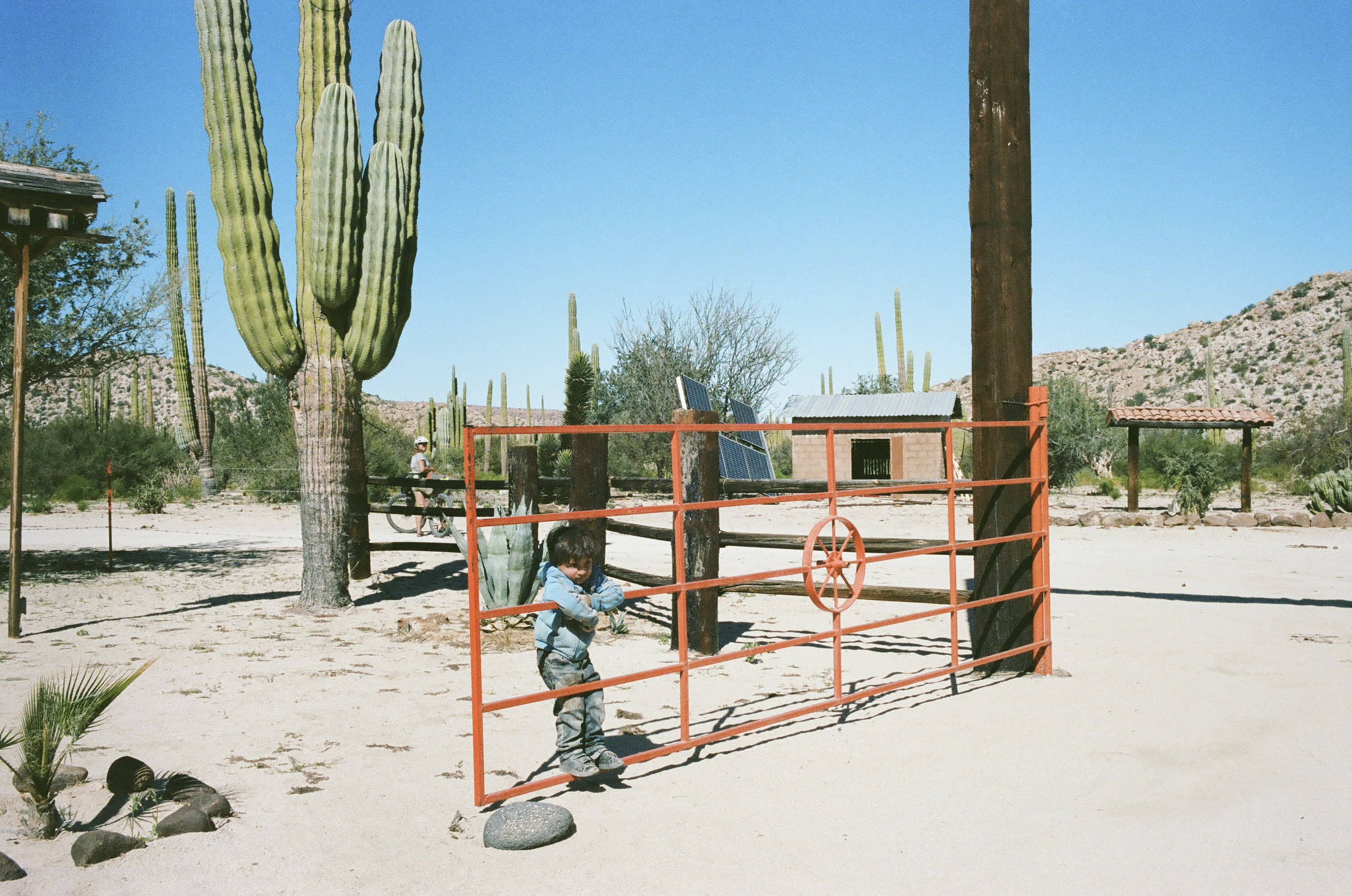 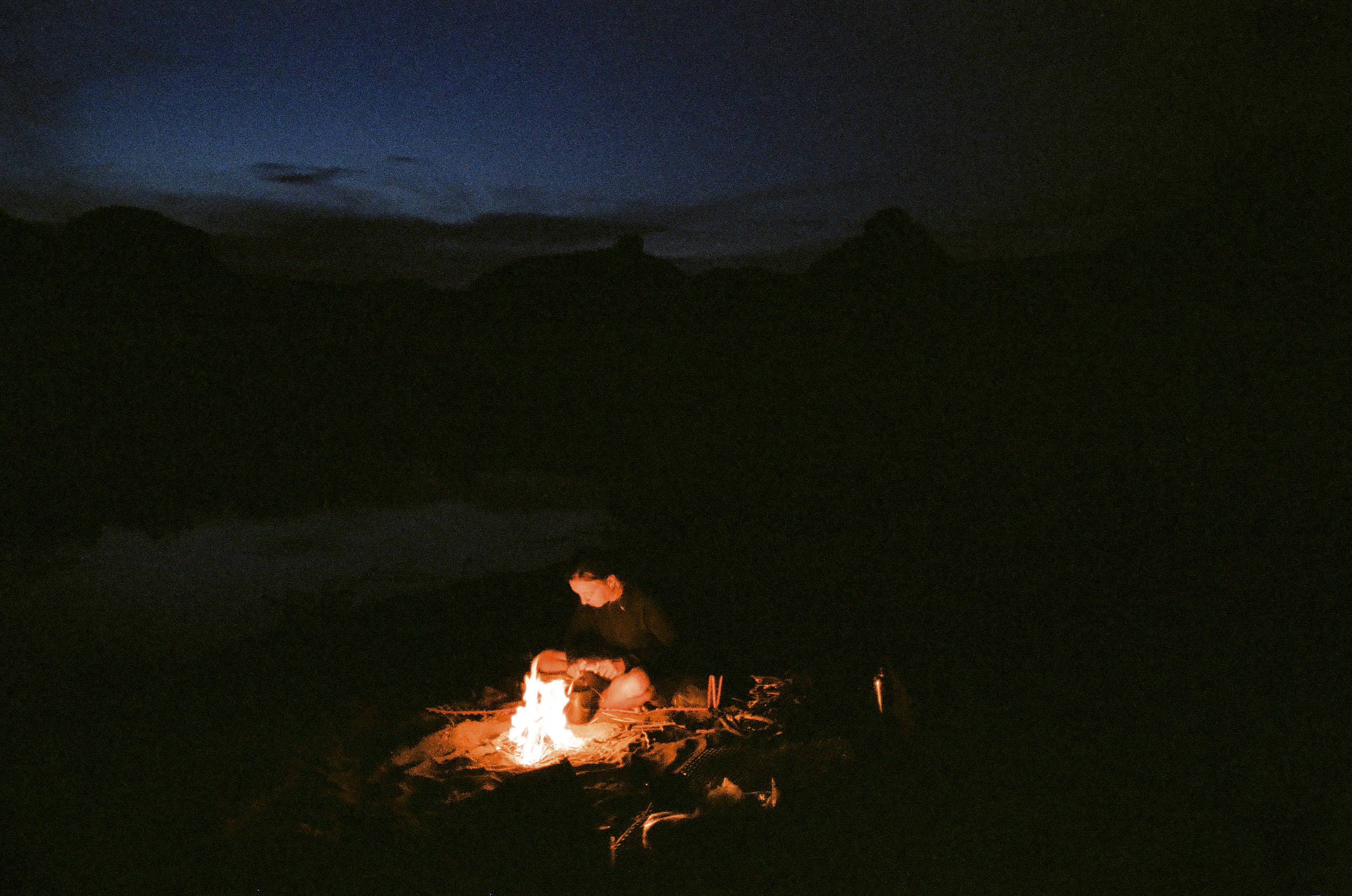 Baja Norte was cold. At night it dipped to around 32 degrees as we climbed higher and higher, eventually reaching 4,000 feet where pine trees grew and the land reminded me of the Sierra Nevada Mountains. Our friend Pepper had been snowed on here just a couple weeks earlier; we considered ourselves lucky to make it over the pass on a sunny day.

We moved through the north quickly, eyes set on the Sea of Cortez and southern warmth. We rolled through Vicente Guerrero 300 miles into the route, home of the beloved FASS Bike. We were pleased that we were only knocking on Salvador’s door to say a friendly hello and swap brake pads, not for a trip-altering mechanical the route is known to provide.

We carried on, until the rhythm of making camp and breaking it down became second nature and every little thing had a home, except what we left behind: extra batteries, Sophie’s worn out Blundstone boots, a ski strap given to a first time bikepacker we encountered earlier on the route. This made room for what we picked up along the way: porpoise bones, local spices, and a simple, cone-shaped coffee strainer we called the “wizard’s hat.” It was, indeed, magical. 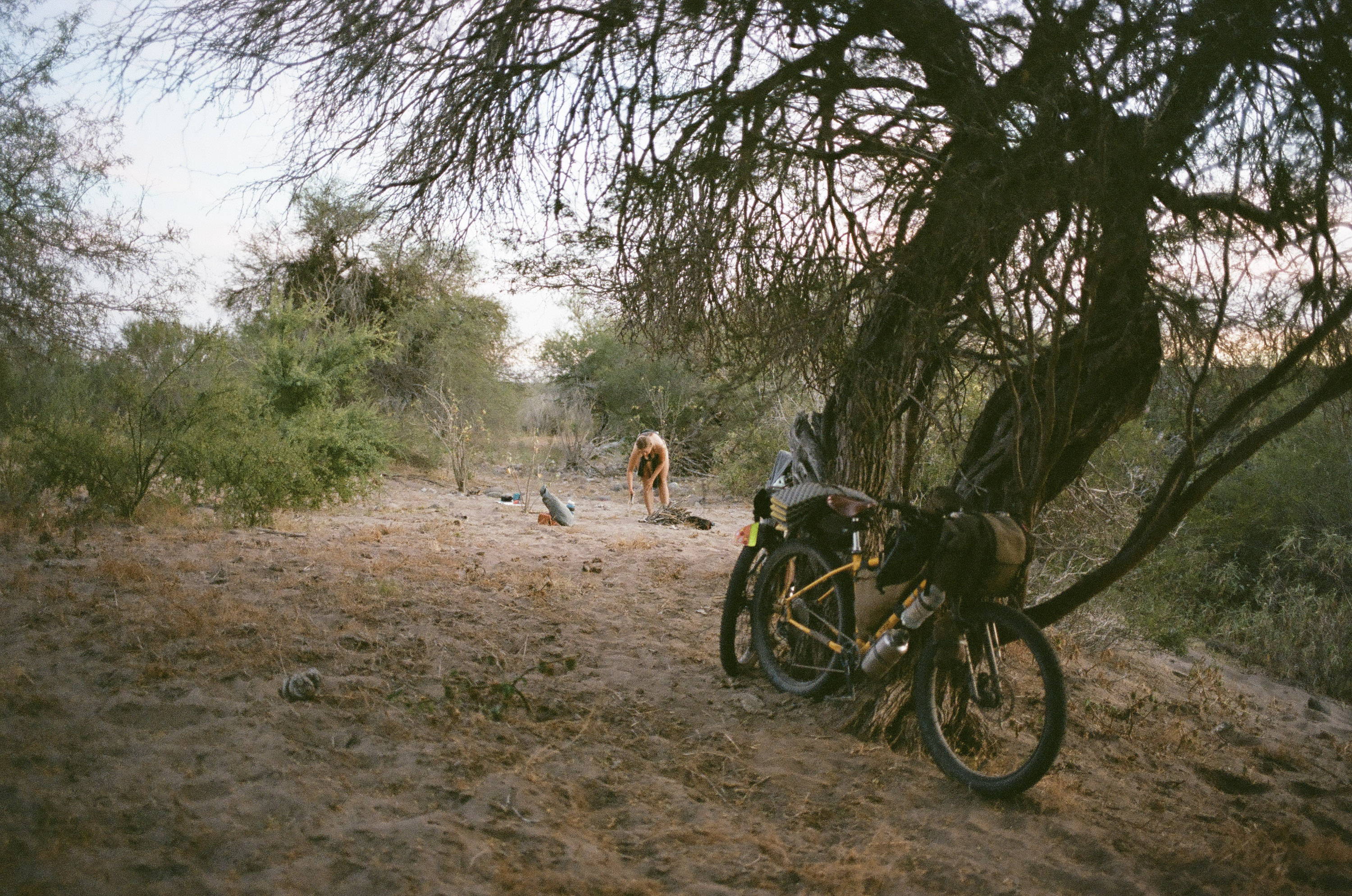 "We carried on, until the rhythm of making camp and breaking it down became second nature."

We learned to watch the wind via an app called Windy, sometimes taking extra rest days in quiet towns to wait for the wind to switch. We carefully timed our departure from Cataviña to have a tailwind through the infamous 126-mile coastal section with no water. In my mind, this was the crux of the Baja Divide. It was a fast wind that pushed us to the next town in a day and a half, with two liters of water to spare, having started with nine liters each. Relief! 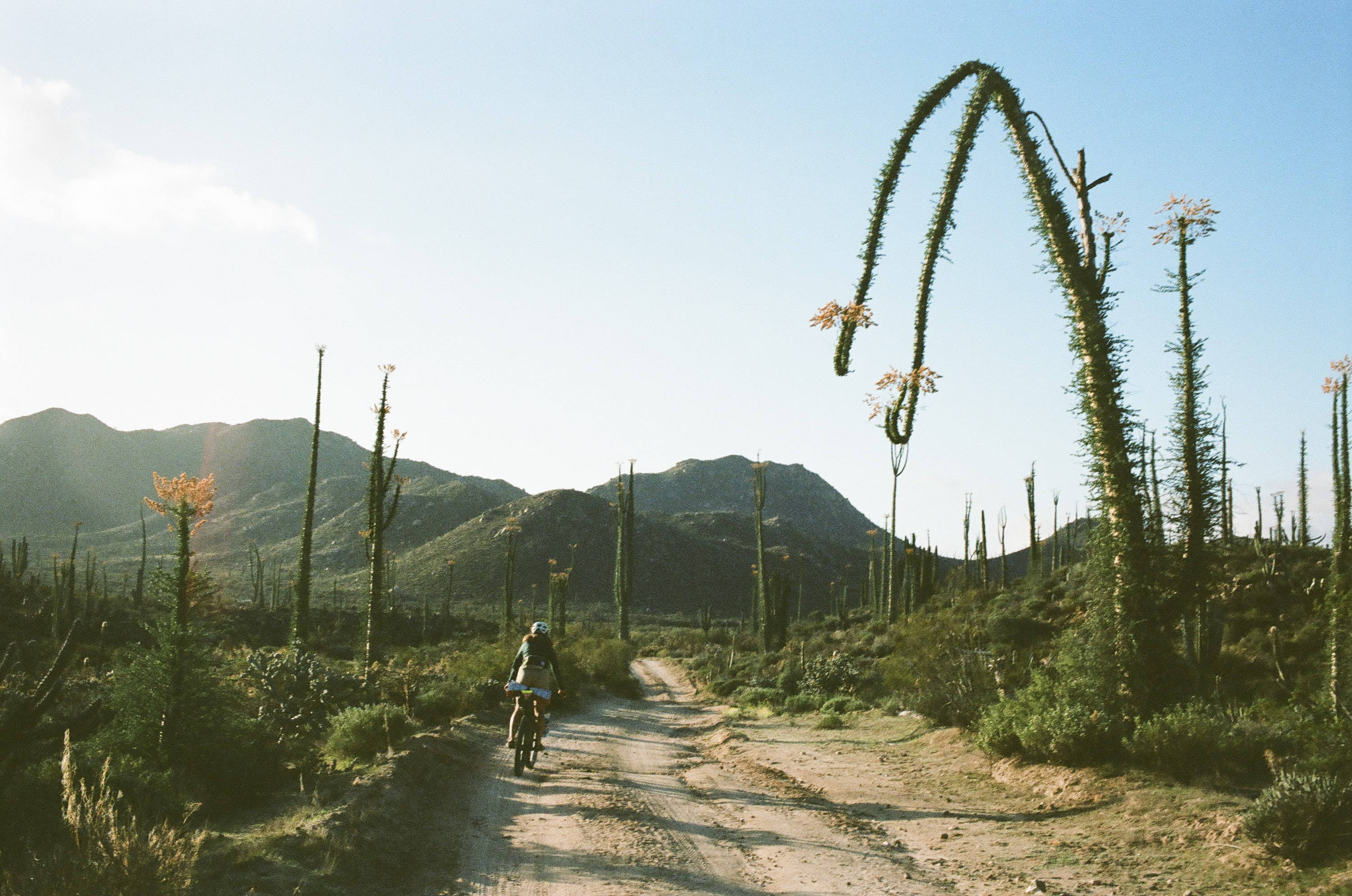 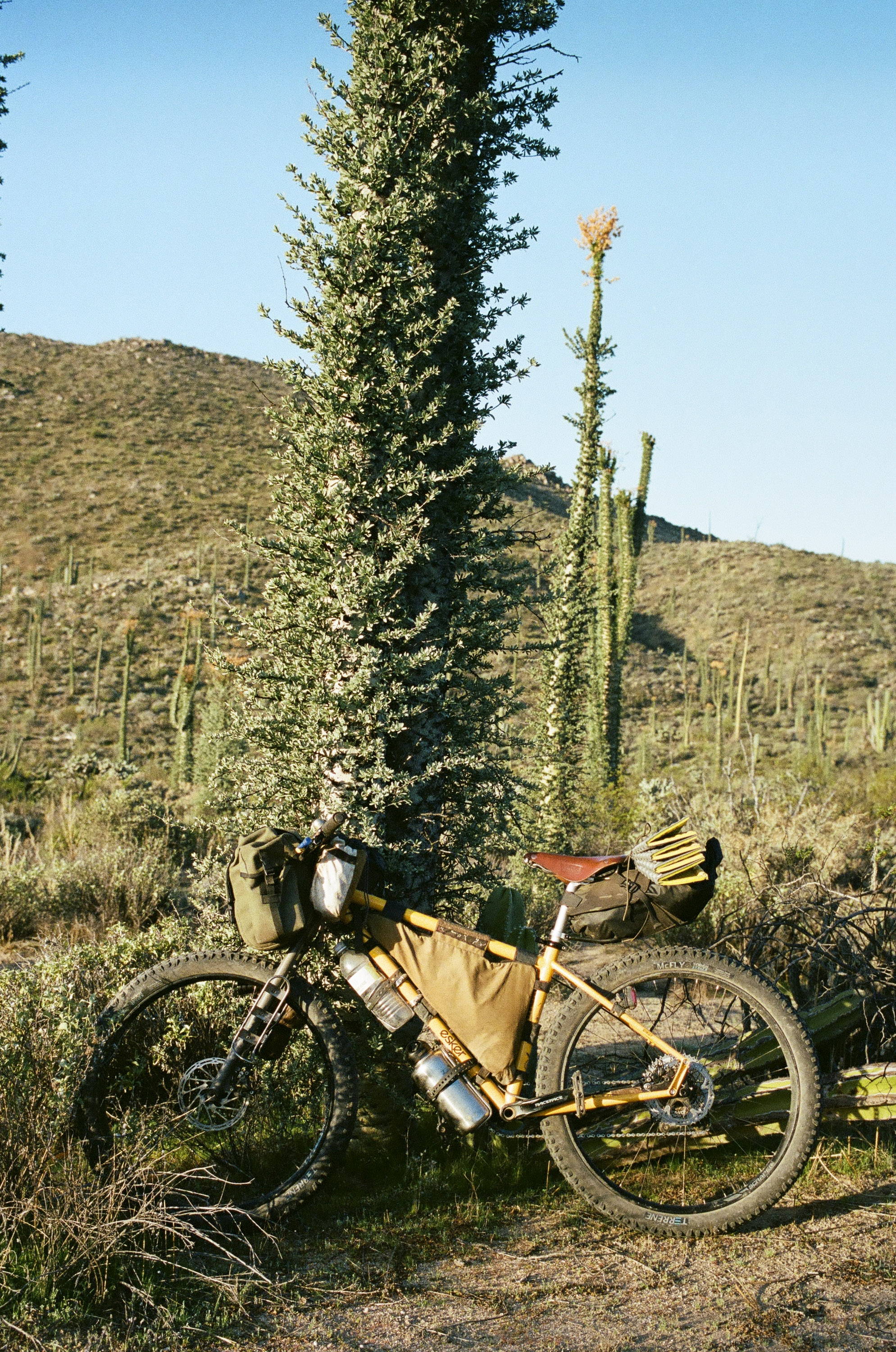 Before we knew it we were halfway through the route, thinking about how we were going to slow down and enjoy the two months we had given ourselves. Slowing down came naturally; the south offered plenty of opportunities to stop. Ranchos with fresh goat cheese and coffee, pristine beaches and palm-lined oases high in the mountains were all welcome distractions.

We took more rest days, and our eat-ride-sleep rhythm crumbled with mornings spent eating chilaquiles for brunch, and departing at high noon. We weren’t mad about it; we had nowhere else to be but midway through a pile of cheesy tortillas and egg.

Arriving here, deep in my chilaquiles with nothing pulling me away except more riding was not easy. I had spent hundreds of hours on cold, tar-paper roofs, contorted in risky positions high off the ground. In order to prepare for the Baja Divide and give myself the amount of time we felt we needed to finish, I worked a harder, weirder job than I would have liked that took me far away from home. 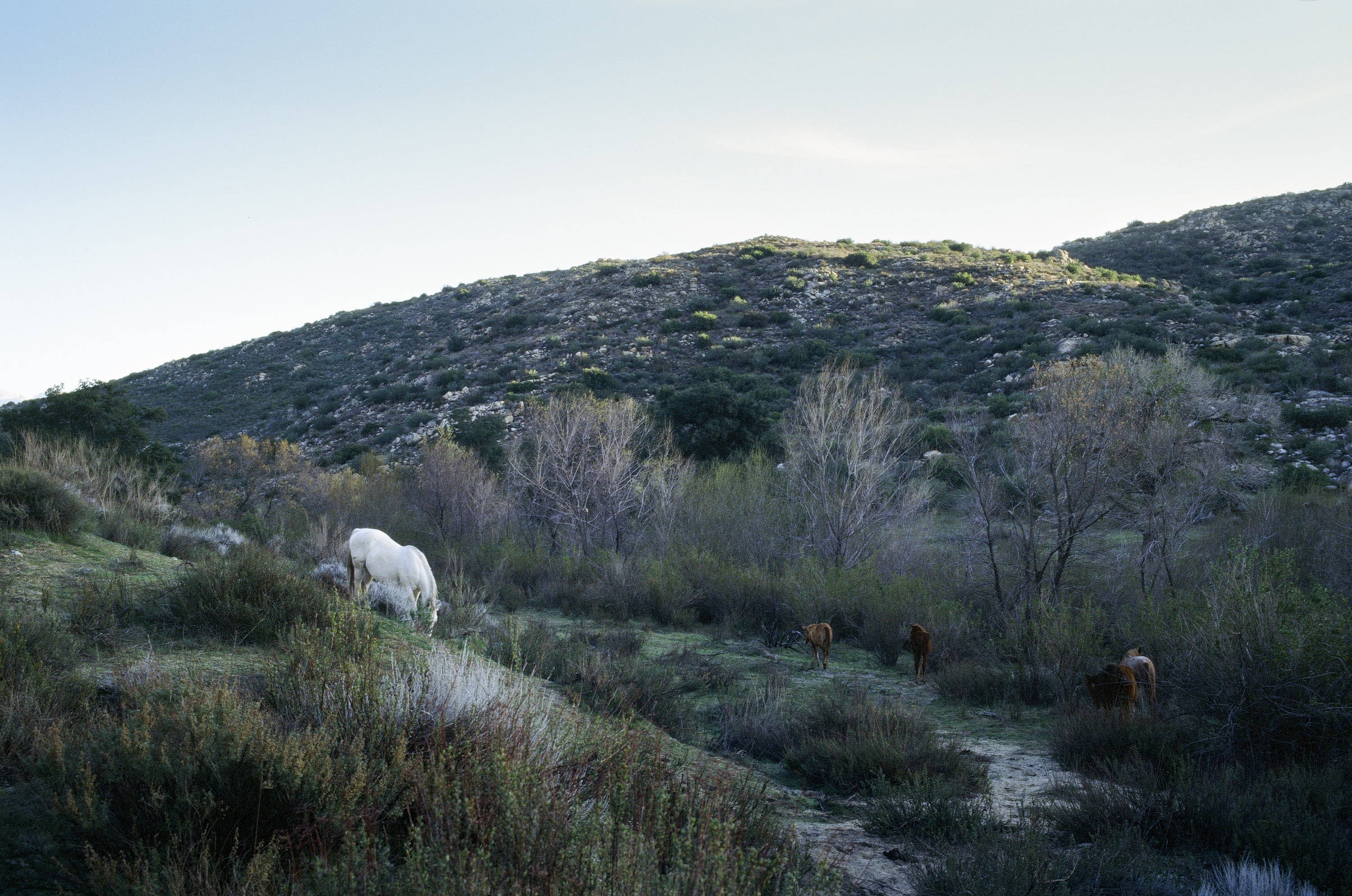 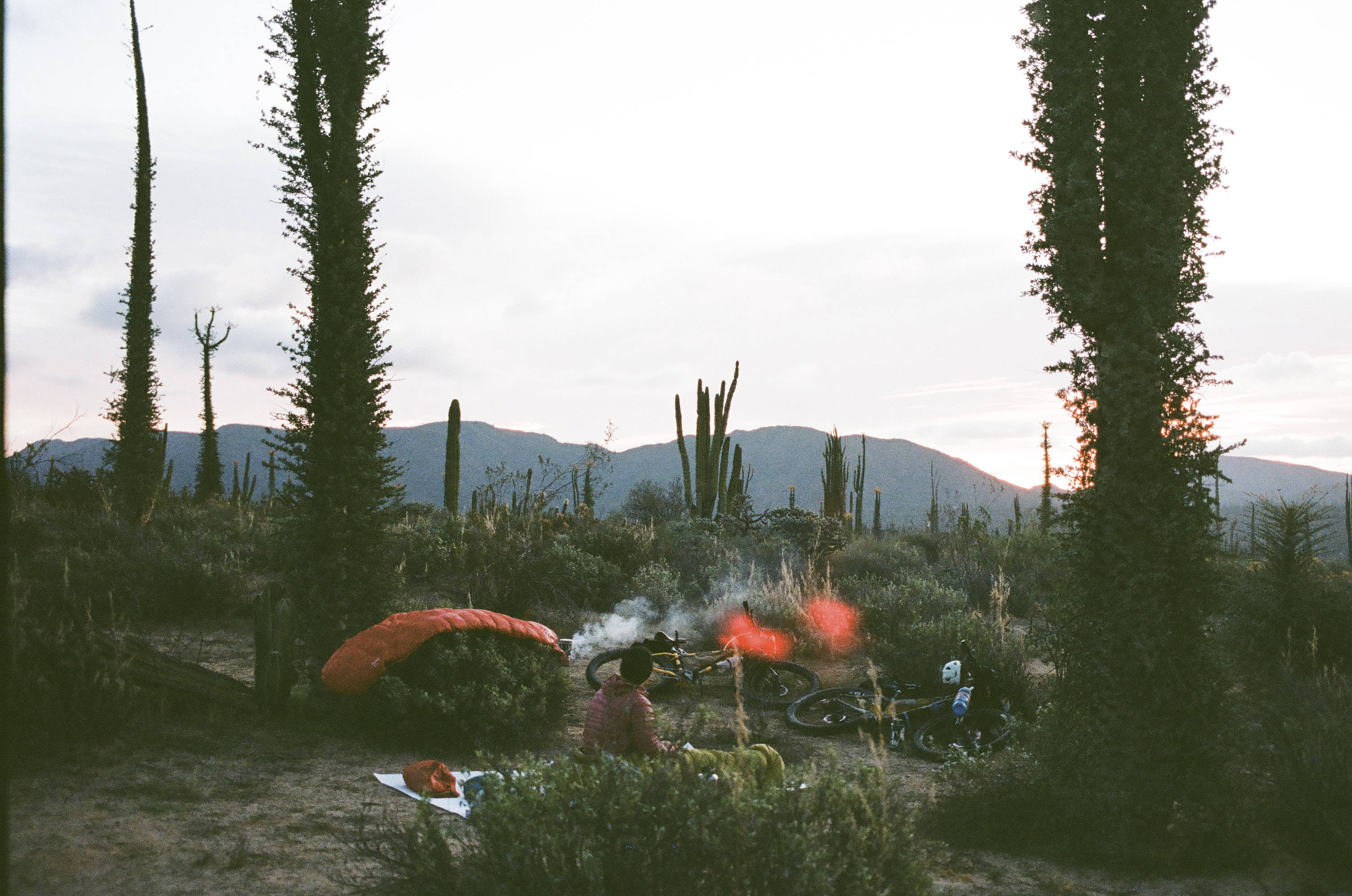 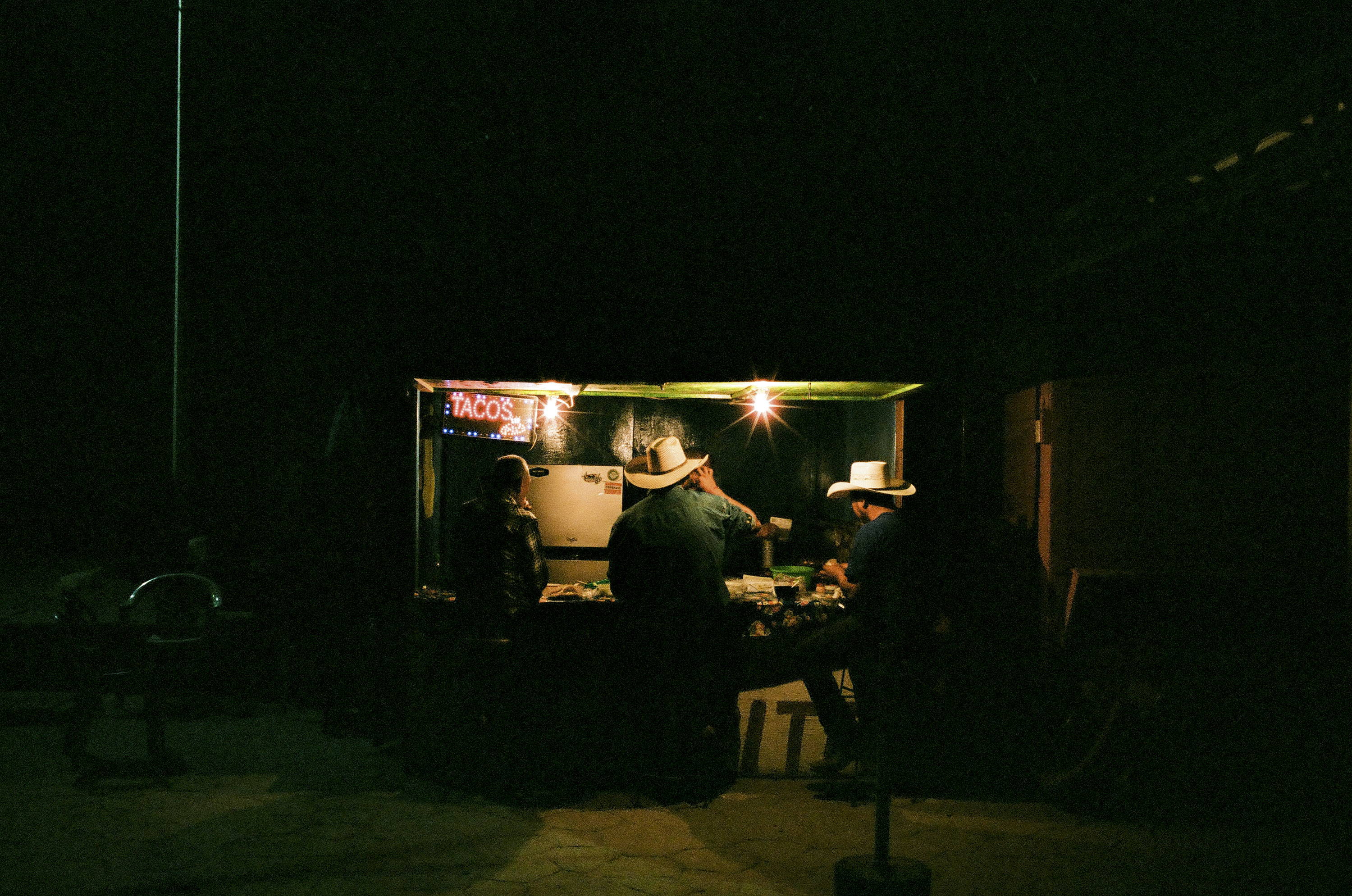 We often don’t hear about what people on longer routes do to get there: whether it’s the Continental Divide or a trip around the world. When I ask, there is usually an interesting backstory that involves some level of sacrifice in order to take off on a bike for months (or years) at a time.

Even if arranging your life in a way that allows you to do the long tour of your dreams seems daunting from the outset, the reality is that for myself and many reading this, it’s a huge privilege. With an able body, no family to support, a passport, no debt, and many other leg-ups, the sacrifices I make to chase my passion are relatively small, even if it feels like hard work at times.

It can be easy to make excuses to not pursue a long tour—in my experience it rarely fits into life perfectly. In reality you have to pack the edges in tight, and maybe pull the zipper together to make it fit. But if you’re able to pack your bags and ride may you fill your belly, get moving, and be grateful for the tailwind. 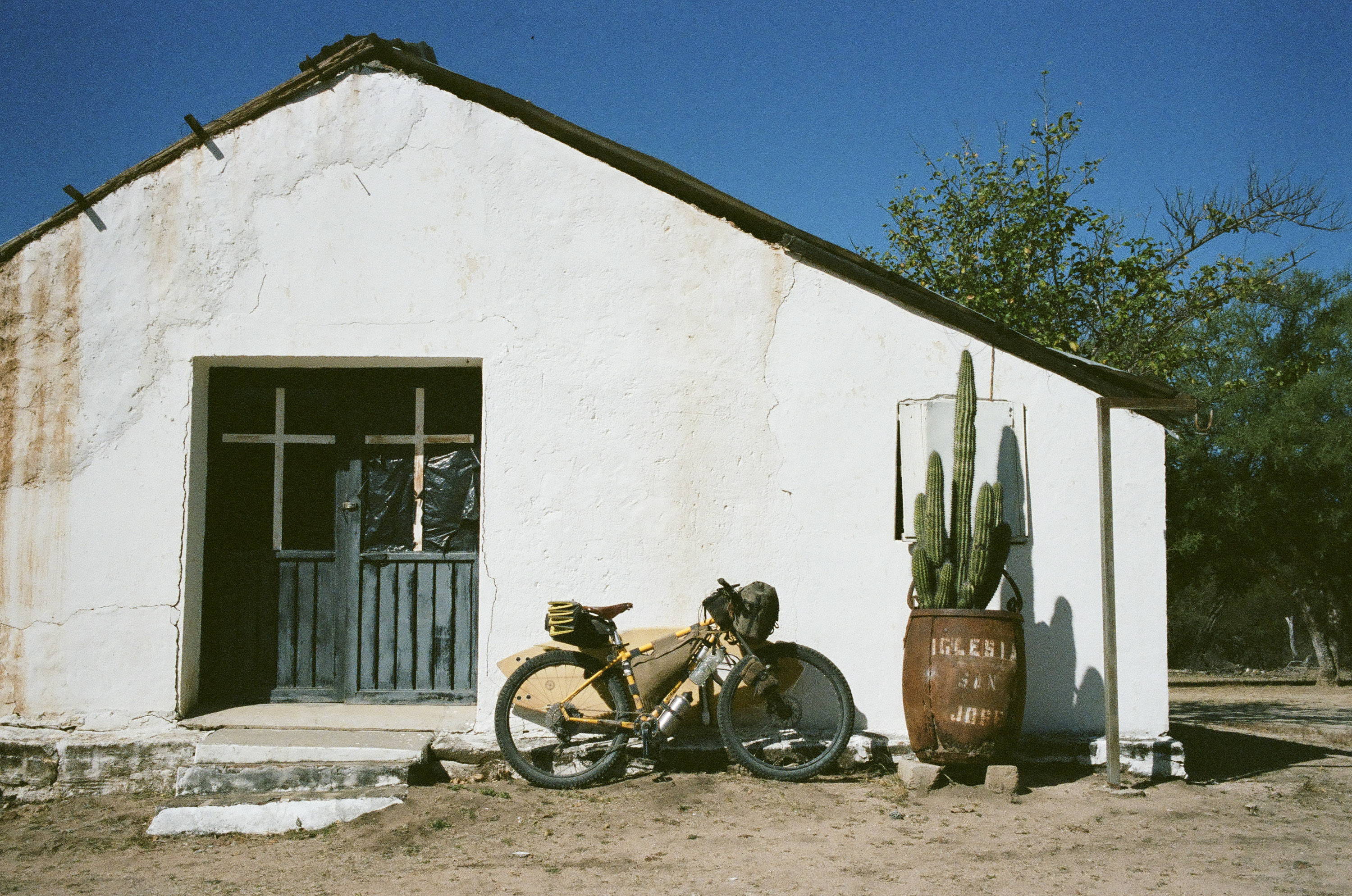